skip to main | skip to sidebar

ST. XENIA OF ST. PETERSBURG, THE FOOL FOR CHRIST

IN THE NAME OF THE FATHER, SON AND HOLY SPIRIT. HERE RESTS THE BODY OF THE SERVANT OF GOD, XENIA GRIGORIEVNA, WIFE OF THE IMPERIAL CHORISTER, COLONEL ANDREI THEODOROVICH PETROV. WIDOWED AT THE AGE OF 26, A PILGRIM FOR 45 YEARS, SHE LIVED A TOTAL OF 71 YEARS. SHE WAS KNOWN BY THE NAME ANDREI THEODOROVICH. MAY WHOEVER KNEW ME PRAY FOR MY SOUL THAT HIS OWN MAY BE SAVED. AMEN. 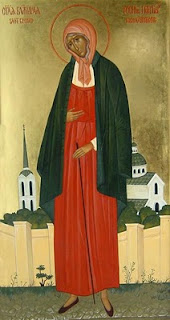 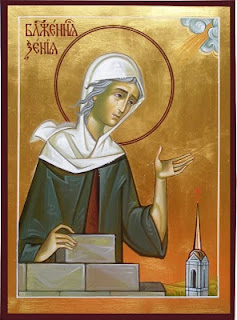 Xenia’s long life, a new church was being built in the Smolensk Cemetery. Workers began to notice that, during the night, someone would haul mounds of brick to the top of the building where they were needed (see the icon). The workers were amazed by this and resolved to find out who this tireless worker could be. By posting a watchman they were able to discover that it was the Servant of God, Xenia. "It was necessary," says one writer, "for her to possess either some super human power or to carry within herself such a strong spiritual fire, such a deep, undoubting faith with which the impossible becomes possible. When one considers God’s great Saints, however, who performed such wondrous miracles by their faith, wonders incomprehensible to the human mind, we cannot consider the Blessed One’s ascetic feats as unprecedented or impossible for a person in the flesh. Xenia truly bore that faith with which all things are possible. While still living in her body, her soul always soared above this world, dwelling in a living, direct communion with God."
The Blessed One was always read

y to help anyone in anyway possible. During the day she would wander about the streets, her face reflecting her internal spirit of meekness, humility and kindness by its warm, friendly glow. At night, in all seasons, she would go into a field and enter into conversation with God Himself. Finally the time came when Xenia was no longer to be found in the streets of the Petersburg Borough nor in the field; her radiant face shone no more amidst the rude shacks of the St. Matthias parish. God called His servant to rest from all her struggles and took her to Himself. Xenia was one of those candles which God lights on earth from time to time in order to light up the path of salvation for the faithful, as the Savior Himself had said, "Let your light so shine before men that they may see your good works and glorify your Father Which is in Heaven" and "If, therefore, your entire body is full of light, no part of it being in darkness, then the whole of it shall be full of radiance as when the bright shining of a candle gives off its light".
In Greece, the honor of the Orthodox people to St. Xenia is large. In Attica, as we know, there are the following churches and chapels dedicated to Her. 1. The parish-church of Nea Palatia, Oropos (a metochion of Sts. Cyprian and Justina Monastery, at Plili). 2. Chapel at the Catholicon (main church) of the same monastery. 3. Chapel of Markou's Family at the town of Mandra (see the photo - inner view).